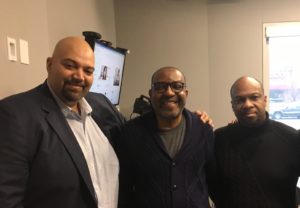 L to R: Bo Menkiti, Kojo Nnamdi, and Antwayne Ford, after an appearance on the Kojo Nnamdi Show.

In a special blog feature, the Initiative for a Competitive Inner City (ICIC) recently published the story of friendship and partnership that developed between The Menkiti Group’s Bo Menkiti and Enlightened, Inc’s Antwayne Ford at last year’s Inner City 100 Awards.

The two struck up a conversation, which led to a pledge to stay in touch back in DC, and soon after, the potential for something much greater developed as they realized the opportunity to create a special partnership for development and pathways to opportunity for job creation and economic development.

From the article, The Menkiti Group’s CEO Bo Menkiti shared the ‘eureka’ moment: ‘“I started to learn more about Antwanye’s passion for why he does what he does, and where he wants to take his company. Beyond just running a successful IT business, Antwanye was interested in having an impact and giving back to the community he came [from],” says Menkiti. “Not just an impact in a general sense, but to create an access point for other individuals to have careers and business opportunities that allow them to have success, too,” he said.’

Read the rest of the story from the ICIC blog of how the common bond of recognition translated into a successful win for the MLK Gateway project in Anacostia.