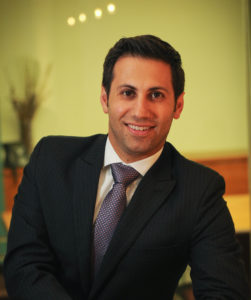 The Menkiti Group formally announces the arrival of Feras Qumseya as Executive Vice President of Development. In this role, Qumseya serves on the company’s Executive Team and leads strategy and oversight for The Menkiti Group to become the premier developer of emerging urban neighborhoods in the region. Day-to-day, he leads all development activities, including acquisition and execution of multi-family and neighborhood commercial projects, portfolio management, and homebuilding operations.

Qumseya has more than 15 years of development experience, much of it on large-scale urban revitalization projects in Washington, DC, and in Baltimore, Maryland. Prior to joining The Menkiti Group team, he was the Vice President of Development at A&R Development Corp., where he was responsible for more than $700 million of active projects and related development activities.

A dedicated public servant, Qumseya has held positions in the DC Mayor’s Office. He led the feasibility, planning, and development of several large, mixed-use, public-private partnership master plans, including serving as the Mayor’s founding Director for the Saint Elizabeth’s Redevelopment Initiative, the largest real estate urban redevelopment project in the country since the development of the Pentagon, totaling 350 acres and a public investment of $4 billion. During his term, he represented the D.C. Deputy Mayor for Planning and Economic Development on two Presidentially appointed working groups: the Regional Innovation Cluster, and the Neighborhood Revitalization Group, centered on the revitalization of underserved communities east of the Potomac River. The goal of the latter was to ensure the Saint Elizabeth’s Redevelopment Initiative achieved President Obama’s Sustainable Communities Initiative.